2014-10-13: With the fall colors peaking throughout Flagstaff, we decided to hike the Abineau-Bear Jaw trails  loop, one of the best autumn hikes in the San Francisco Peaks.

The loop is approximately seven miles long with a 1,900′ net elevation gain from 8,500′ at the trailhead to 10,400′ at the top of Abineau Trail. The Bear Jaw and Abineau legs are quite steep in places. Waterline is an access road following an old waterline, and as such, is a wide trail with a gentle grade. Most trail guides suggest four to five hours for this loop. With stops to water the dogs, take photos, snacks, and lunch, we generally plan on a leisurely five to six hours.

After the short trail to the junction of Abineau and Bear Jaw trails, we hung a left to head up Bear Jaw, which follows an old two-track for a while. The trail heads generally uphill, rolling gently early on, becoming steeper near its junction with Waterline. There are a few views along the trail of the Peaks, but mainly, it’s a beautiful forest hike. The last half a mile or so goes through a thick stand of aspens, one of my favorite spots in the autumn. This year, we hit it after a lot of the leaves had fallen, carpeting the forest floor in gold. Bear Jaw meets up with Waterline near 10,000′ elevation. 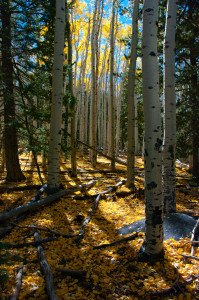 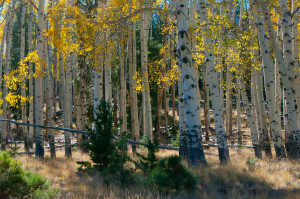 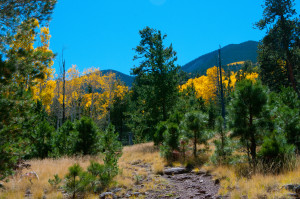 From Bear Jaw, Waterline is a steady, gentle uphill stroll along an old access road. The trail offers frequent views north through the trees. There are a lot of aspens along the trail, which carpet the roadbed with yellow fallen leaves in the fall. Locals often refer to autumn Waterline hikes with the phrase “Golden Road.” Near the upper end of the road, the path breaks out of the forest into a stunning view of the Peaks. The air was incredibly clear, giving us a gorgeous view of the cinder hills, high desert, cliffs, and Grand Canyon to the north. 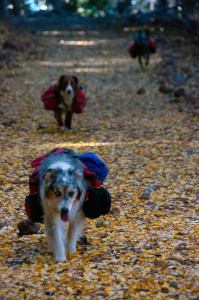 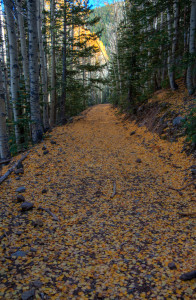 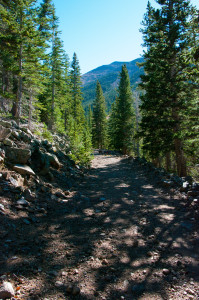 Abineau is the steepest leg of the loop, dropping nearly 2000′ over its two mile length. The first half mile below Waterline is the most strenuous portion and the footing can be tricky. An avalanche in 2005 caused part of the trail to be blocked off, and the trail was rerouted around the trees and debris. The going gets easier after the trail goes back down onto the canyon floor and into deep forest, but it’s still a steady downhill back to the junction.

The aspens had recently lost a lot of leaves, so there was a thick, fresh carpet of golden leaves on the forest floor and decorating the evergreens. It was absolutely magical. 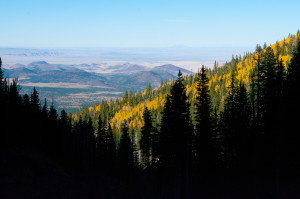 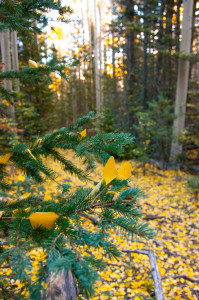 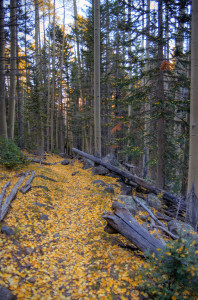 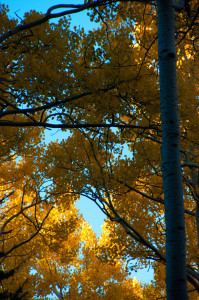